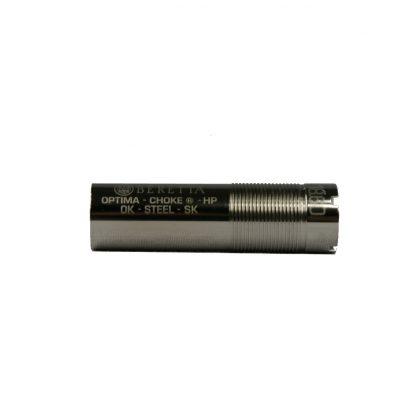 With the introduction of the SV-10 Perenina and Prevail series over and under shotguns in 2008 a third Optima-Bore choke configuration was added,  the Optima-Choke HP.  As noted above under the Optima-Choke Plus section, the extended use of high performance steel and metal alloy non-toxic shot imparts considerable stresses. In the case of the Optima-Choke Plus part of the solution was to use a choke tube design offering a thicker choke tube wall to better resist these forces. This in turn results in a heavier, larger diameter barrel.

One of the principal objectives in designing the Optima-Choke HP (OB HP)system was to develop a choke tube system that would withstand the rigors of the extended use of heavy payloads of steel/metal alloy shot while being able to retain the weight saving and handling characteristics of the lighter Optima-Choke barrel contour. To accomplish this Beretta engineers designed a choke system locating the threaded portion of tube a nominal 10 mm (.394 inch) further to the rear of the muzzle end of the tube then found on the Optima-Choke system. This effectively created an increase in wall thickness at the muzzle end of the choke tube where the greatest degree of choke constriction typically occurs and stresses are the highest without having to use the larger barrel contour.

Barrels that use the Optima-Choke HP will be marked OB HP immediately adjacent to the gauge marking.

The start of the threaded portion of the Optima-Choke-HP tube is located a nominal 40 mm (1.57 inch) from the breech end of the choke tube.

Each of the above choke tube types is designed for use with a specific type barrel and as such features different thread locations and external measurements, none can be interchanged with the other Beretta choke types. Every Beretta choke tube has information engraved on the tube to identifying the manufacturer (PB), the constriction (F, IM, M,  IC, CYL), the approval for steel shot use (SP) and the choke type (Optima-Choke, Optima-Choke Plus, Optima-Choke HP)

There are no reviews yet.